Rivercrest Park owner Steve Hoare has confirmed 15 black-type mares are among the bookings into Ducimus this season.

The stakes winning son of champion sire Snitzel is owned by Orbis Bloodstock and Hoare is delighted with the support from broodmare owners in Western Australia.  “I’m hard-pressed to recall another locally-based stallion that has attracted as many black type producers or performers in their first season at stud.  He’s a good stallion to work with and took to serving like a duck to water.”

The first covers for Ducimus this month were Magdelaine (Geiger Counter) and Many Secrets (Viscount).

Magdelaine was bred by Peters Investments and her half-sister to Old Money (Old Spice) won the 2000 WATC Derby when it was a Group 1.  Her son Trap For Fools (Poet’s Voice) added another Group 1 to the page in last year’s Mackinnon Stakes at Flemington.

Many Secrets descends from Group 1 broodmare Most Secret (Bletchley Park) and her first foal War Secret (War Chant) broke his maiden at Kalgoorlie last Sunday for Peter Fernie and the Morris family.

Macchiato (O’Reilly) is another mare booked into Ducimus coming off winning update last Sunday.  Her 3yo colt Dinga (Safeguard) cruised home second-up in a Casterton maiden for trainer Symon Wilde.  “He was too good and careered away to win by more than two lengths,” Wilde said.  “The margin may well have been bigger but Dean (Yendall) looked after him and eased down in the run to the line.”

Ducimus is one of the spearheads among Snitzel’s second-wave of sire sons born in 2014.  That same generation includes Aquis Farm newcomers Invader and Jukebox, Trapeze Artist (Widden) and Showtime (Arrowfield).

He won the LR Talindert Stakes at Flemington which earned a Timeform 2YO rating above fellow Snitzel colts Summer Passage (G1 NZ Sistema Stakes) and Menari (G2 Run to the Rose).

The Talindert honour-roll includes successful sires All Too Hard (Vinery) and Star Witness (Widden) and this year’s winner Microphone trained on to claim the G1 Inglis Sires’ Produce Stakes at Randwick.

Snitzel completed a hat-trick of Australian titles in 2018-19 and he’s off to another good start this season with Godolphin 3yo Exhilarates winning the G3 Quezette Stakes and LR Atlantic Jewel Stakes in Melbourne.  His $15 million earner Redzel is also on track for a three-peat in the The Everest at Randwick on October 19 following a last-start victory in the G3 Concorde Stakes.

Rivercrest Park and Orbis Bloodstock stand Ducimus for a $2,750 (inc GST) fee with payment on a live foal.  He has been entered for the Westspeed Platinum Scheme and Rivercrest Park owner Steve Hoare can be contacted for further information on 0409 987 970. 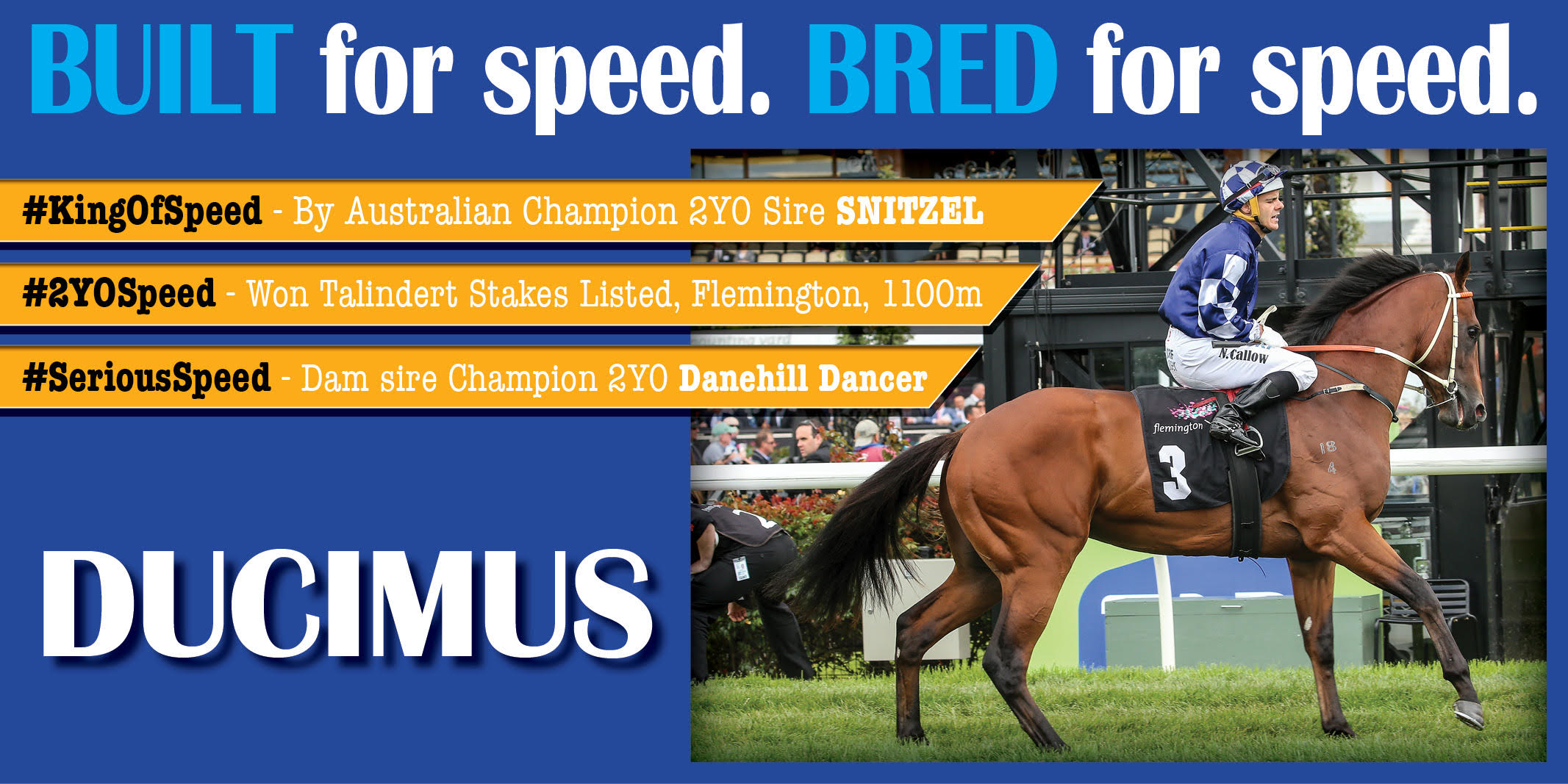