He or She will head to The Championships in Sydney following a deserved victory in the G2 Blamey Stakes (1600m) at Flemington.

The former Perth galloper had won 7 times in 9 starts before transferring to Lindsay Park trainer David Hayes for last year’s spring carnival.  He scored at Caulfield in October but Saturday’s result was his first in black-type company. 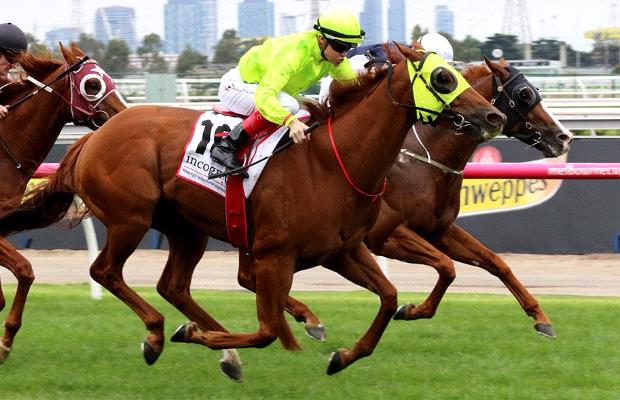 He or She powered home off a fast pace set to become the 5th stakes winner for Rivercrest Park stallion Kendel Star.  “He needs hard-run miles so we might look at the Doncaster,” Hayes said after claiming his fifth Blamey Stakes.  “He will be on the minimum so it will be a good race for him.

“We beat a very good horse in The United States today and I think it will turn out a very good form race down the track.”

The G1 Doncaster Mile worth $3 million will be run at Randwick on April 2 and bookmakers have quoted He Or She at $26.

Kendel Star (Kenmare) is rising 26 and is one of the oldest active stallions in Australia.  “He’s an amazing horse and covered 13 mares last year,” Rivercrest owner Steve Hoare said.  “He won’t lay down – just like his progeny.”

He Or She transferred to Victoria after winning five in a row at the Ascot summer carnival for part-owners Alan & Birgitt MacAlister and trainer Vaughn Sigley.  They had knocked back a $300,000 offer from Hong Kong before agreeing to a deal with Lindsay Park that valued him at double the initial bid.

The MacAlisters and Sigley kept a share and they also retained his 3yo half-sister She’s A She (My Atacanta) who was placed in a Lark Hill trial earlier this season.  Their dam Danessa (West Point) was put down in October soon after delivering a Vital Equine filly that died at birth.