God Has Spoken 3yo Holy Ghost opened his account with a fast finishing victory in the Amelia Park Plate (1100m) at Ascot on Saturday.

Trained by Neville Parnham, he’s a homebred for Colin Loxton who raced God Has Spoken (Blackfriars) to five stakes wins in Perth before retiring to Rivercrest Park Stud.

Holy Ghost was narrowly beaten on debut at Belmont in May and was runner-up again when resuming at Ascot earlier this month. “We took the blinkers off and added a tongue-tie today,” Parnham said. “He stepped away slowly against some very fast horses but got a nice cart behind Snippy Miss and I was confident when he tracked into the race.

“He goes really good now that he’s realising all that ability. And it’s good to see God Has Spoken sire a city winner. He’s a beautiful horse and hopefully he can make a nice stallion.

“I have another filly by him named Praying With God and she can win at Pinjarra on New Year’s Day.”

Holy Ghost’s dam Death Knock (Lonhro) was a provincial winner for Loxton and her first foal Playing Zeus, a Kalgoorlie winner in August, is by God Has Spoken’s younger brother Playing God.

“That’s the right way to ride him,” Steven Parnham said. “He finished strongly with a good turn of foot and there’s no reason why he can’t go through the classes.”

Tiff Has Spoken will be the next God Has Spoken 3yo to go public. He is coming off two trial wins at Lark Hill for Sharon Miller. 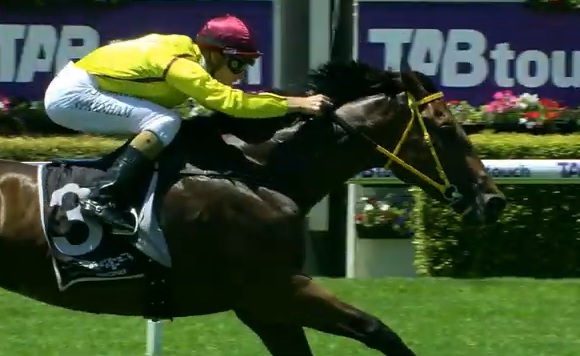