Outstanding galloper God Has Spoken will cover his first book of mares at Rivercrest Park Stud this year.

A powerhouse 16.3hh son of champion sire Blackfriars, he retires with 8 wins and earnings of $1.19 million for the owner-trainer team of Colin Loxton and Neville Parnham.

Rivercrest Park owners Steve and Diane Hoare have purchased the stallion outright to stand at their south-west nursery in Stratham.  “There were other offers from interstate and overseas but Colin and Neville wanted him to stay in Western Australia,” Hoare said.  “We went up to inspect him at White Hills last week and he’s a stunning individual with a beautiful temperament.

Blackfriars has sired 29 stakes winners and none of his sons have been credited with more black-type wins than God Has Spoken – he was successful at that level as a two, three, four and five year-old from 1400m to 2100m.

God Has Spoken hit the ground running on debut to win the Westspeed 2YO Plate (1100m) at Ascot.  He then produced a paralysing burst from the tail of a capacity field to claim the G3 WA Sires’ Produce Stakes (1400m).

Resuming as a spring three year-old, he landed the LR Aquanita Stakes (1800m) and then split seasoned campaigners Sniper’s Bullet and Scenic Shot in the G1 Kingston Town Classic at Ascot.

Connections mapped out a WATC Derby campaign for the colt and he looked set to fight out the classic with Bridgestone until Lindsay Park raider Chartreux descended to defeat the stablemates.

“We did consider taking him to the Brisbane carnival,” Parnham recalled.  “He pulled up in perfect order after the Derby but we decided to give him an extended winter spell.”

During the next summer carnival, God Has Spoken maintained his winning strike-rate in the G3 R J Peters Stakes (1800m) before adding another black-type victory in the G3 Strickland Stakes (2000m).

Another Group 1 placing followed in the Kingston Town Stakes and he looked set to go one better in last year’s G2 Perth Cup until Black Tycoon, another son of Blackfriars, came from the clouds to beat him a short-head.

“As he got older, he was crying out for 2400 metres and had a pretty powerful finish on him,” Parnham declared when God Has Spoken left his Ascot stables.  “He was a lovely racehorse and – like his brother Playing God – is going to be hard to replace.” 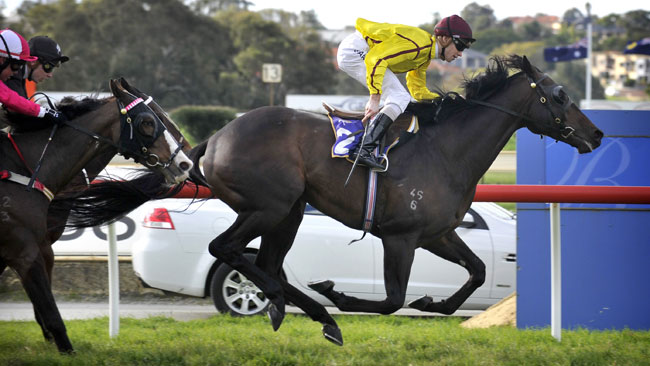